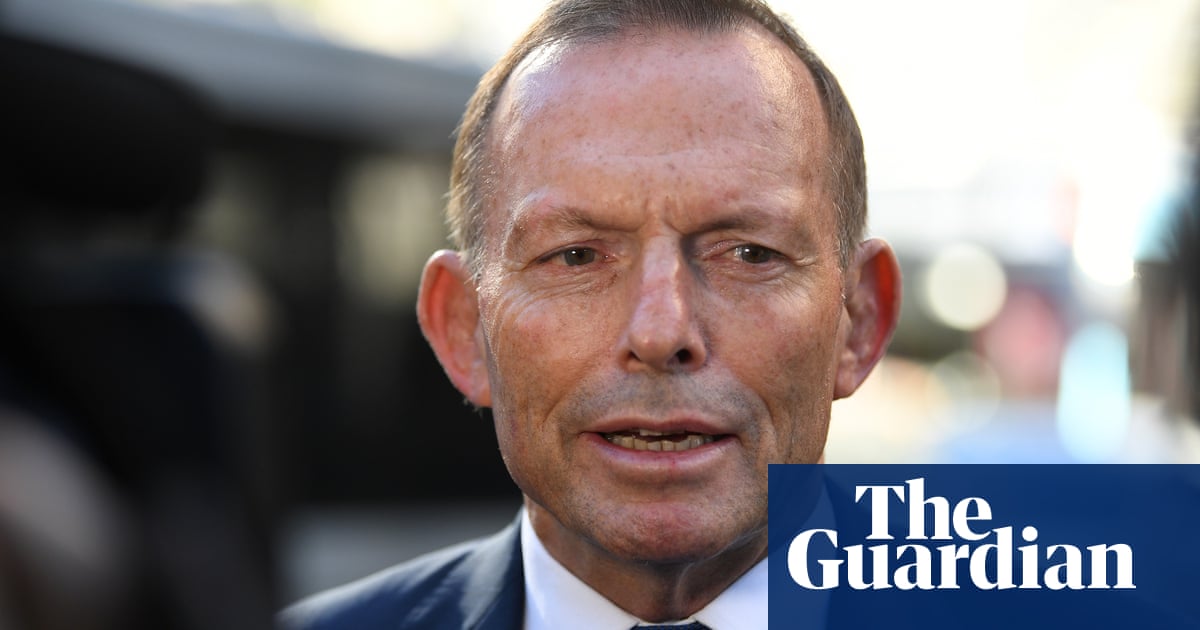 The Department of Trade declined to comment publicly on Wednesday but insisted no decision had yet been made, after the Sun reported that Abbott would be given a leading role on the board of trade.

Abbott has questioned the existence of the climate crisis, suggesting in 2017 that global warming was “probably doing good”, and compared environmental policies with “primitive people once killing goats to appease the volcano gods”.

He gave a speech to the rightwing Heritage Foundation in Washington DC in January, saying Donald Trump’s presidency had been “quite a success” and his methods were “crude but effective”.

Abbott has repeatedly been accused of misogyny. A blistering parliamentary speech by the then prime minister, Julia Gillard, calling him out as sexist, became an internet phenomenon in 2012.

“I just find this appointment absolutely staggering,” Thornberry said. “On a personal level, I am disgusted that Boris Johnson thinks this offensive, leering, cantankerous, climate change-denying, Trump-worshipping misogynist is the right person to represent our country overseas.

“And on a professional level, this is someone whose only experience of trade agreements was turning up to sign the treaties [the former Australian trade minister] Andrew Robb negotiated for him.

“He was ousted by his own colleagues after two years in power, and kicked out of Australian politics by his own constituents just last year. They are the people who know him best, and they wanted rid of him – yet here we are, hiring him to negotiate our trade deals around the world. If it wasn’t so downright humiliating, it would be almost hilarious.”

It was unclear whether Abbott would be an adviser, or would chair the board, alongside the trade secretary, Liz Truss. The board of trade is meant to advise the government as it negotiates new post-Brexit trade relationships.

While making no comment on the reports about Abbott’s role, Truss announced appointments to 11 new business advisory committees on Wednesday, which she said would be “bringing British industry from farmers to carmakers closer to our negotiations”.

Truss’s department is widely seen as in the firing line in No 10’s overhaul of Whitehall. The Foreign Office is already swallowing up the Department for International Trade, and Johnson was known to have been frustrated when he was foreign secretary that he did not have the task of negotiating trade deals.

As well as criticism of Abbott’s controversial views, there were also questions about whether the former leader has the expertise for a senior trade role, with complex negotiations looming.

Mike Rann, a former Australian high commissioner to the UK, told Politico: “Britain asking Tony Abbott to run its trade negotiations would be about as credible as Australia asking Gavin Williamson to take charge of its education system.”

In 2016, Abbott wrote a piece in the Times recommending British voters choose to stay in the EU rather than vote for Brexit.

“Any British decision to withdraw from the European Union would have seismic consequences,” he wrote. “There’s much to dislike about the EU but very little that would be improved if Britain left.”

It did not take long after the vote to leave for Abbott to say he was “quietly thrilled” with the result and recant his former Brexit scepticism, becoming an enthusiastic supporter.

Abbott received recognition in this year’s Queen’s birthday honours list, being made a companion of the Order of Australia (AC) “for eminent service to the people and Parliament of Australia, particularly as prime minister, and through significant contributions to trade, border control, and to the Indigenous community”.

At the time, he said: “This award doesn’t mark the end of my public service, it’s just that it now takes a different form, and I wear a number of different uniforms to do it.”

Abbott, who was ousted as prime minister by his colleague Malcolm Turnbull in 2015, was then turfed out of federal parliament last year when he lost his Sydney seat of Warringah in the election.

London-born Abbott, who moved to Australia when he was two years old and later studied at Oxford University as a Rhodes scholar in the 1980s, has previously been effusive about the shared bonds of English-speaking countries.

Speaking at the Oxford Union debating society in 2019, he said failing to implement Brexit would represent “defeat on an epic scale, hardly matched since the Norman invasion”.

He struck up a close relationship with the UK PM when Johnson was foreign secretary. When Johnson won last year’s Tory leadership contest, Abbott tweeted that “he has the courage and the passion to keep Britain great”.